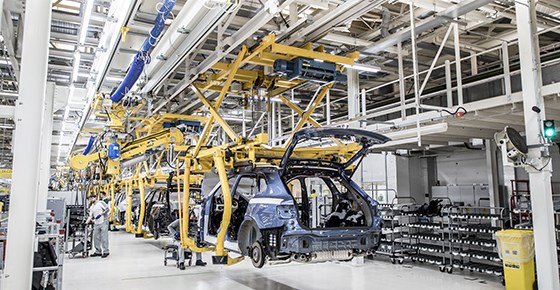 UK car production rose in April, with demand growing 5.2% year-on-year, according to figures released today by the Society of Motor Manufacturers and Traders (SMMT).

127,952 cars were internal British factories using a double-digit decline in the same month recently when Easter bank holiday timing impacted output. Growth, however, was also buoyed by production improve at a number of plants to generate numerous key new and updated models.

Manufacturing either way home and overseas markets grew by 7.3% and 4.7% respectively, with 103,662 cars developed for export within the month and making up 81.0% of production. However, year-to-date, overall output remains down, by -3.9%, using a total of 568,378 cars leaving production lines while in the first four months. Four fifths of those were exported, as domestic demand fell -10.3% against a less substantial -2.2% decline in vehicles destined for global markets.

Mike Hawes, SMMT Ceo, comments:“While April’s growth isn’t altogether surprising as a result of significant decline in output this period a year ago, it is great to observe earlier planned investment into new models delivering results. However, given such investment was made judging by the disposable and frictionless trade afforded by our EU membership, draught beer UK plants to bring in another wave of the latest models and drive future growth depends upon maintaining these competitive conditions after Brexit. That is why it’s vital that government acts to our participation from the EU customs union and single market.”

Meanwhile,?Justin Benson, Head of Automotive at KPMG comments: “Car manufacturers will appreciate the very good news that April’s numbers bring, albeit with a lower base in April 2017. However and the numbers, year as of yet, are 4% documented on recently, 2017 would have been a record year.

“Looking ahead, focusing on overseas markets is vital for the future vitality from the UK automotive sector. With 81% of UK cars produced for export, the UK punches above how light it is within the global automotive market. But we mustn’t sleep walk into an emergency.

“With around 50% of those exports about to Europe, UK car makers are anxious for rapid progress while in the Brexit talks. For exports and opportunities overseas to remain to thrive, the automotive sector needs certainty, in addition to time for them to adapt.

“Trading using the EU varies after March 2019 despite the ‘transition agreement’ therefore it is crucial that we notice the modern EU trading arrangements agreed this season.”