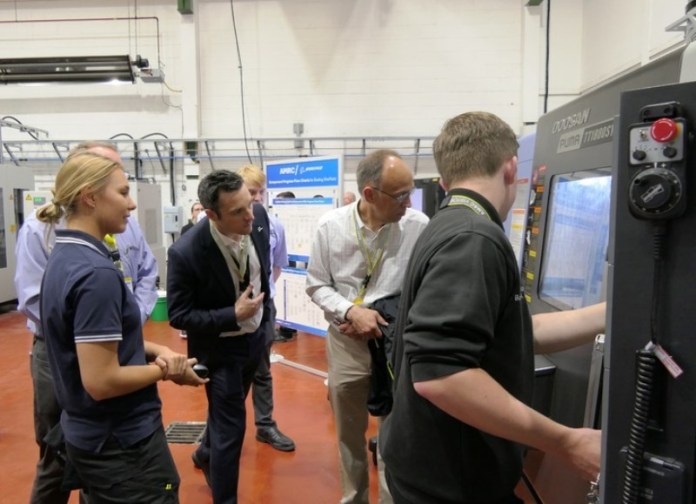 Dave Hyem, Gm of Boeing Portland, and his awesome team found be aware of the R&D work that may support operations at Boeing Sheffield if this opens later in 2010.

The facility will be the first being in-built Europe for aerospace giant Boeing, who chose Sheffield dependant on its longstanding partnership when using the AMRC, its skilled workforce and investment in research, training and development.

The R&D programme is developing the newest manufacturing techniques that may enhance production efficiency and reduce costs whilst maintaining quality.

These game-changing technologies will probably be utilised inside manufacture of actuation system components for Boeing’s Next-Generation 737, 737 MAX and 777 aeroplanes at Boeing Sheffield.

Matt Farnsworth, Head from the AMRC Machining Group, said the visit would be a great prospects for the to view the R&D programme in working order and showcase its successes and goals for the upcoming 18 months, that AMRC continues to back up Boeing Sheffield as the manufacturing processes take hold and matured on location.

The visiting party saw demonstrations in the manufacturing processes and technologies being developed and met by incorporating with the team that produce on the core of Boeing Sheffield’s staff, including several of the Boeing apprentices currently training for the AMRC Training Centre.

He said: “It’s great for hosting the Boeing team at the AMRC; they have been keen ahead and then determine the investigation work that’s underway and discover how the AMRC style of collaborative industry and academic studies so successful.

“The AMRC are maturing we now have and manufacturing processes that will underpin operations in Boeing Sheffield additionally, the AMRC is able to support Boeing’s ambitions to be expanded in-house production selective technologies.”

During the demonstrations Mr Hyem said it was pay off the AMRC had evidenced in perfect clarity the growth of the programme was progressing so Boeing could see the milestones being achieved.