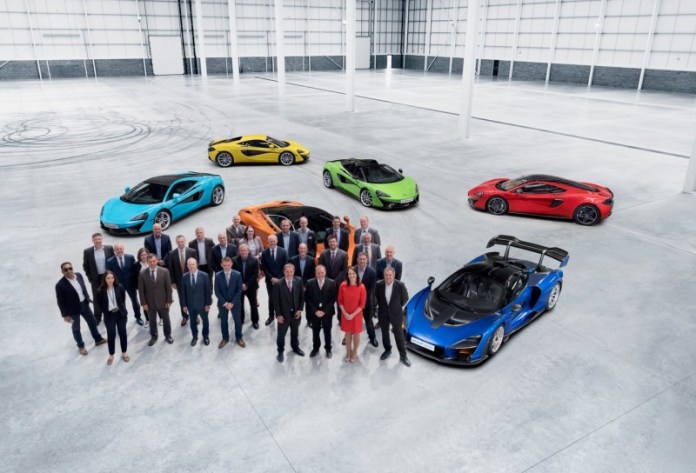 McLaren Automotive has the crucial element on the Sheffield building that will house the modern 50 million McLaren Composites Technology Centre (MCTC) prior to final fitting out.

The MCTC from the Sheffield region is definitely the Yorkshire-based facility where McLaren will innovate the process for making the ultra-lightweight and strong carbon fibre tubs that happen to be at the centre famous its luxury class of sports cars and supercars.

The finished tubs should be delivered to the McLaren Production Centre in Surrey in which the company’s vehicles have been hand-assembled since 2011.

Ruth Nic Aoidh, McLaren’s Executive Director, Commercial and Legal, received the ‘key’ into the building from Owen Michaelson, Us president of Harworth Group who may have built machine for McLaren’s use at the Advanced Manufacturing Park in Rotherham.

On display for that occasion were the firm’s current group of products including folks the Sports Series and Super Series or a rare appearance with the McLaren Senna, all 500 units that have already been allocated to customers.

When open, the MCTC will be you will find only McLaren’s second ever production facility along with the first outside its native Woking.

Around 45 McLaren staff are already housed in the University of Sheffield’s Advanced Manufacturing Research Centre (AMRC), innovating accomplishing this for creating lightweight tubs and once fully operational, the group will grow to approximately 200 people.

Carbon fibre is almost certainly an integral part of McLaren’s DNA, this company having introduced the first carbon fibre chassis into Formula One in 1981. Carbon fibre’s innate strength and light-weight properties imply this company hasn’t ever created a race car, sportscar or supercar without since.

Also on hand to witness the handover alongside Harworth Group were a selection of stakeholders closely of this particular build including senior representatives from Sheffield City Region, Sheffield City Council, Rotherham Borough Council, contractors JF Finnegan and architects The Harris Partnership.

The building will now undergo a couple of months of fitting out that will see all the manufacturing equipment installed, including a giant press making its way from Germany september.

Ruth Nic Aoidh, McLaren Automotive’s Executive Director, Commercial and Legal for McLaren Automotive said: “Getting the real key to your building that should house the McLaren Composites Technology Centre is really a major milestone for people and the next chapter within our growth as being a young, ambitious, innovative company.

“It’s also a crucial day its the multitude of individuals, organisations and suppliers which have supported and shared our ambitious prefer to increase the risk for Sheffield region the location of McLaren’s second production facility.

“This project is likewise evidence of their shared mindset and also the region’s long association with advanced? materials that we’re qualified to use and reap the benefits of.

“Over the coming months the Centre will be fitted by helping cover their your production equipment discovered become fully operational this year and support numerous skilled jobs.”