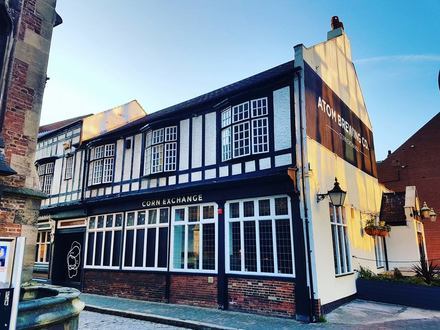 Micro-brewery Atom promises to enter production in ‘new’ premises in Hull early in a few days, once it heats up opens its doors during the Corn Exchange on North Church Side.

Atom?is actually refurbishing the centuries-old building to establish a welcoming and versatile space.?”We’ll have 16 keg lines and 4 cask, joined by approximately 100 cans and bottles from around the globe, as well as exciting spirit and cocktail range” says Nick Kirman, Operations Manager. “By stocking only brands that share the Atom ethos of quality, we’re committed to elevating Hull’s drinking experience.”

Atom may be developing unique and pioneering beers since its brewery opened on Malmo Food Innovation and Technology Park in 2014. Subsequently, the team has witnessed a large step to its blending of scientific principle and raw enthusiasm, launching dozens of beers which are now stocked nationwide within the UK’s top bars, restaurants and supermarkets.

Whilst an innovator in new and exciting beers, the brewery also is targeted on educational activities, including business talks, brewery tours, and alluring school groups to research the chemistry and physics behind the brewing process. Particularly if plays a large role at Atom Brewing Co. Corn Exchange, from staff providing expert strategies for inquisitive visitors, all the way to interactive workshops and affiliate marketing parties.

“It was this passion that led to the founding of Atom from the start,” says Chief Beer Geek Allan Rice. “Now we have public-facing premises which can be open 7 days one week, we could place on an adaptable programme of eye-opening curiosity quenchers.”

Complementing a notable collection of beers, spirits and cocktails from around the world, the friendly bar presents a specifically designed menu of small plates by way of the KerbEdge Street Food team and locally roasted coffee through the Blending Room.

“The beers would be the nucleus of Atom Brewing Co. Corn Exchange, with everything else orbiting around them,” explains Nick. “Over next months we’ll be hosting one impressive events, and dealing tough to promote the town like a safe and alluring destination for high quality food and drink.”

With 220 square metres to generate a modern environment that’s suitable for friends, families, after-work tipples and those that simply fancy a pint, Atom are preparing to open their doors to anyone wanting a chilled, upbeat bar where every customer will discover a drink to accommodate their palate.

“Corn Exchange was a drinking establishment for more than 300 years,” adds Nick. “Atom is expecting to push this tradition above ever and firmly root itself in the middle with the city.”